So I’ve been playing with github workflows for haxeui the last couple of days, and came up with a pretty decent workflow so thought i would share in case its useful for anyone else or in case anyone might like to either write, or help write a proper haxe workflow custom action… HF?

An important thing i wanted / needed in my build is the ability for commits to haxeui-core to trigger builds (github workflows) in other repositories, namely, the haxeui-backends. As it turns out this was relatively simple by having the backend repos trigger on “push” as well as “repository_dispatch”… all haxeui-core has to do now in its workflow is send a load of curl commands to these repos to trigger this dispatch:

The other fairly important thing was the custom workflow action. I needed a way to be able to install and setup haxe as simply as possible across multiple repos, i could of just copied and pasted to yaml config, but this gets out of hand pretty fast with a load of repos, so ive thrown together a custom workflow action that does this for me, then using it in my backend workflow is as simple as:

The action is really pretty crappy and just a “make it work” type of thing, but work it does, im using it across all my haxeui repos (well, the ones i have moved over to github workflows anyway). Another example of it is on my test repos (it uses a different source repo for the action, but its the same essentially):

So that will build a js and hxcpp app on linux, osx and windows using haxe 3 and 4. 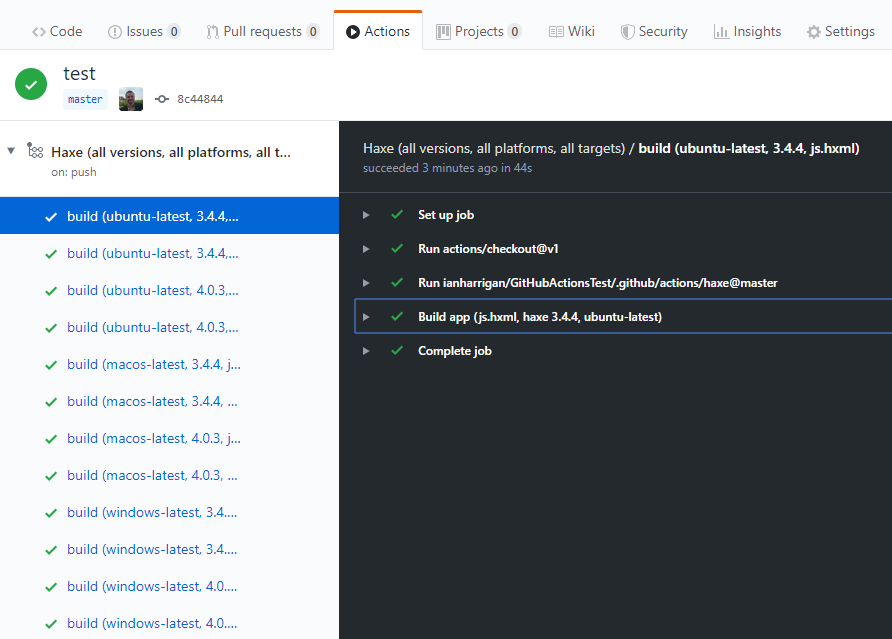 Anyways, i figured possibly this might be useful for someone, and might motivate / help someone to write a proper (maybe official?) custom haxe workflow action.

Here are some links to the workflows / actions for ref (may also be useful to someone maybe):