If like me you manage a few (or many!) haxelibs then releasing can be more that a little bit of a pain. The process isnt complicated (edit haxelib.json, zip up, submit, commit haxelib.json, rinse and repeat), but there are enough steps to make it more than a little bit annoying to do over and over again.

So ive come up with a little tool (ofc using haxeui

) to help with the process a little. It was written in about 6 hours so its far from perfect (especially the haxelib / app data stuff) but it works pretty well and shouldnt make any changes to your repos (except haxelib.json), furthermore its actually a pretty good example of how to write haxeui applictions (well, how i would suggest anyway).

The source is here: https://github.com/haxeui/haxelib-helper, ill be adding to as i need to but as it stands it does do what its supposed to (used it a few times to submit hxWidgets releases), if you are using it, my advice would be to not “auto submit” or “auto commit” or “auto clean” until you are happy with the resulting .zip file, once thats all right it makes releasing haxelibs a breeze

Here are a bunch of screens! 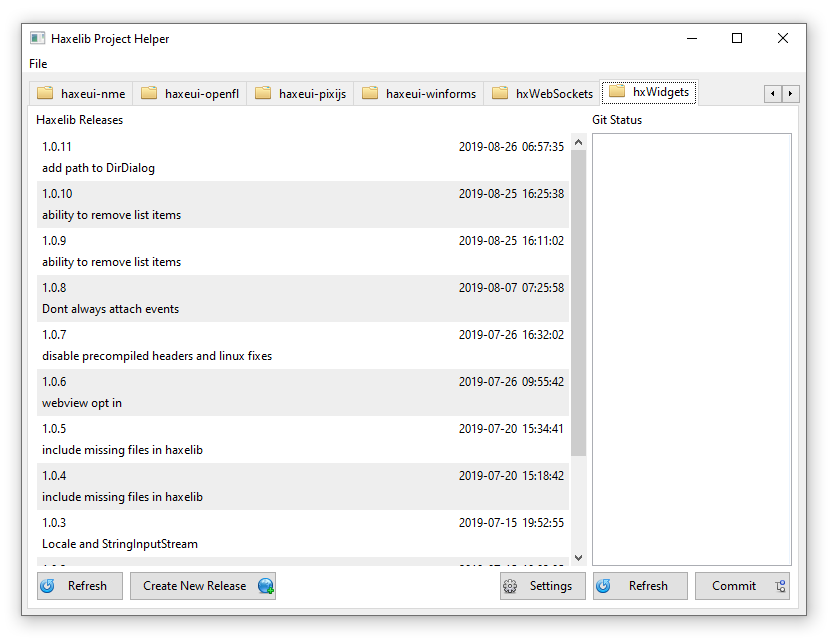 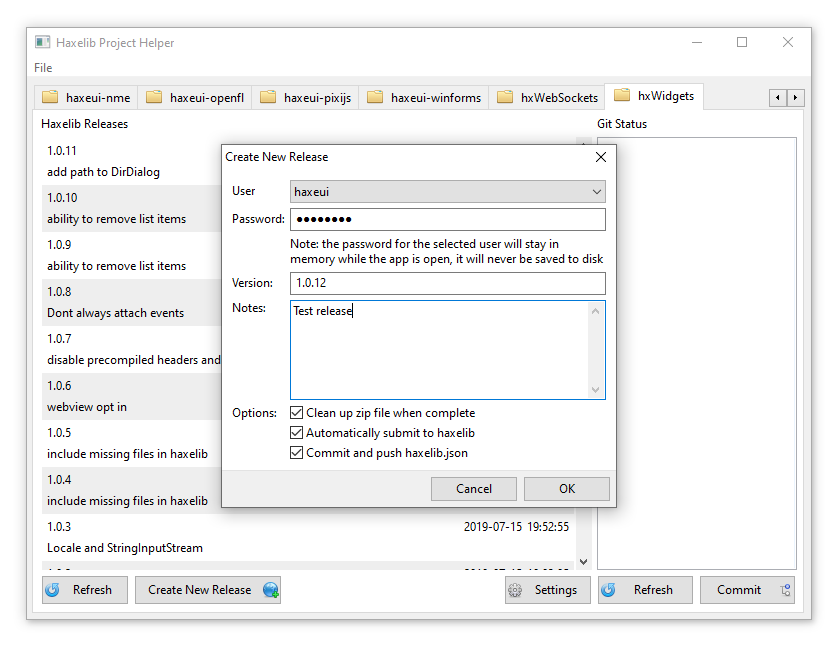 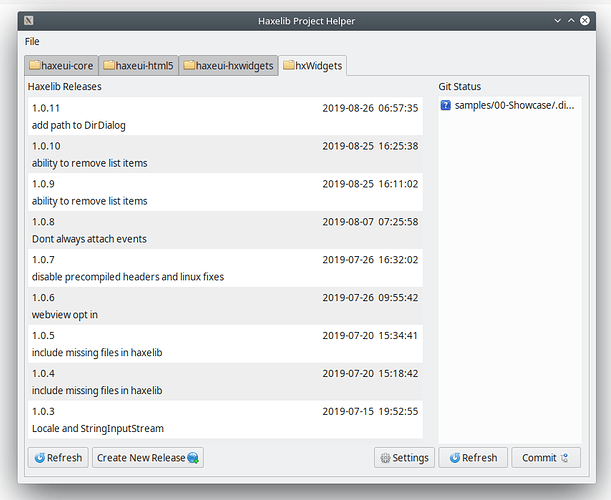 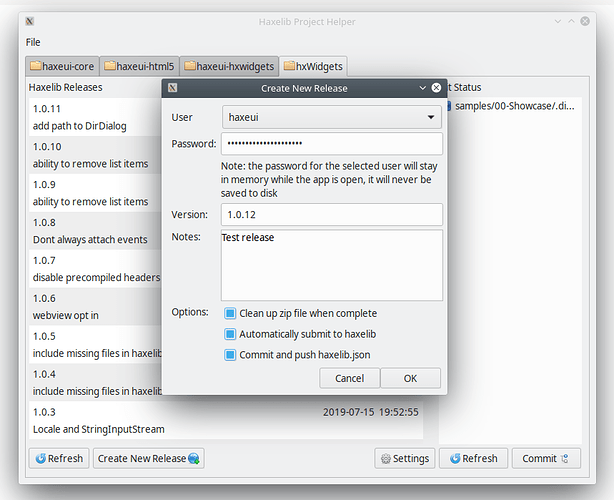 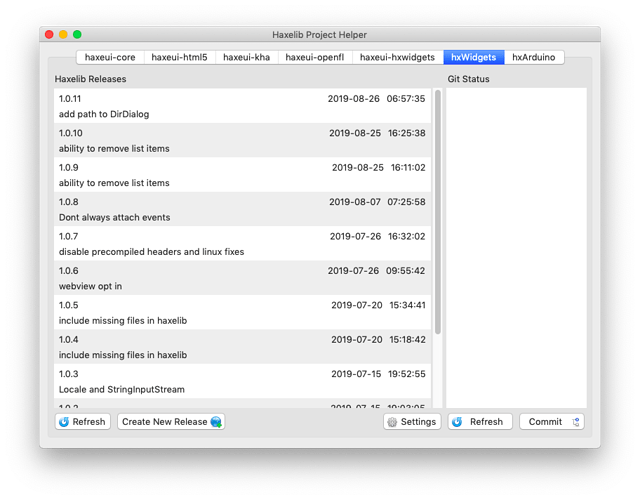 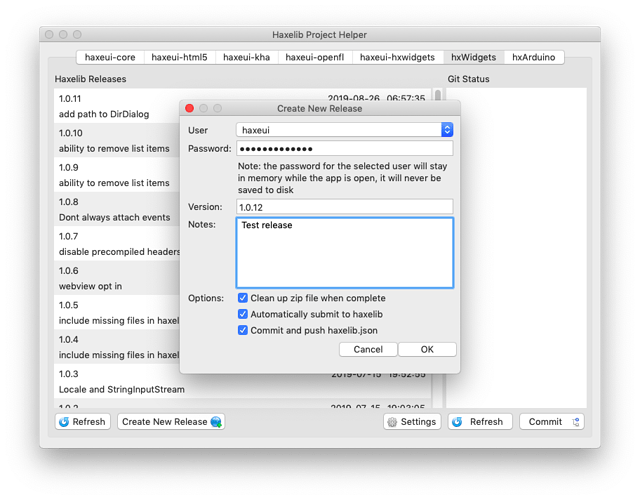 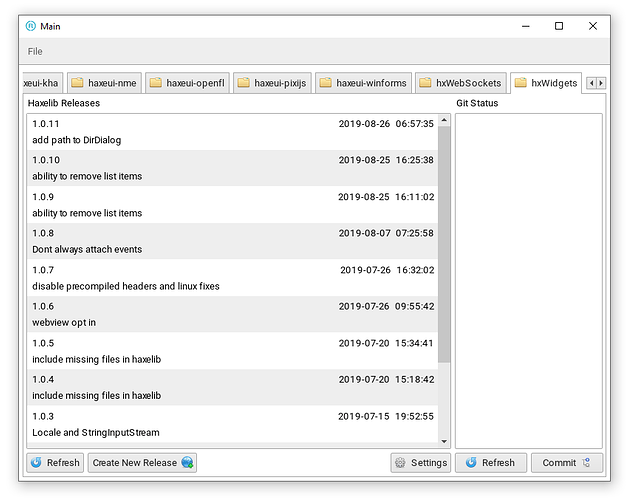 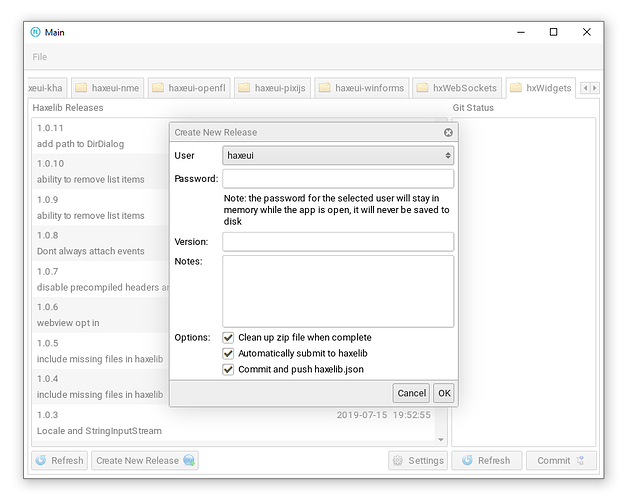 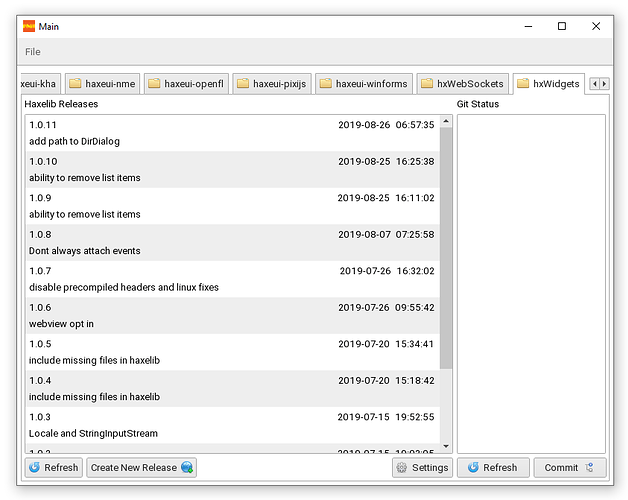 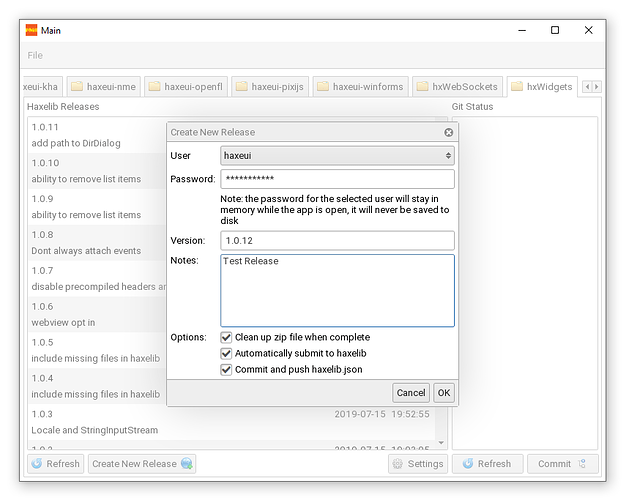 Made an update so can you submit multiple haxelibs from the same screen… makes it easier to submit things like haxeui (which has a load of backends) in one go!

As usual heres a bunch of screens! 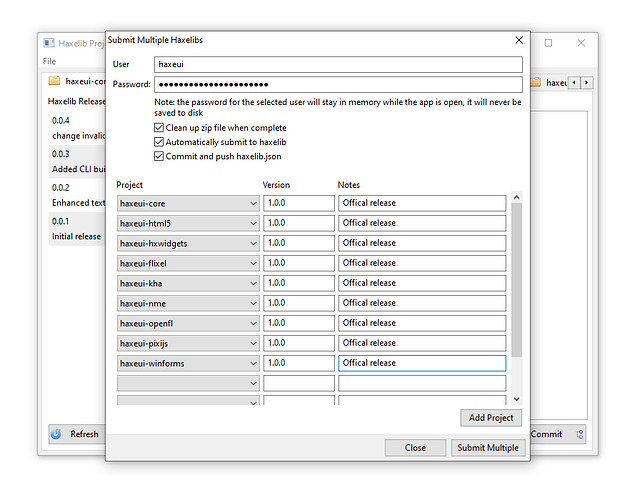 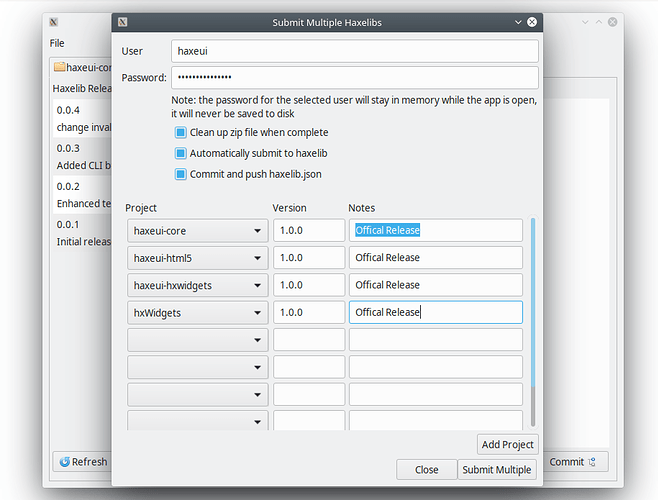 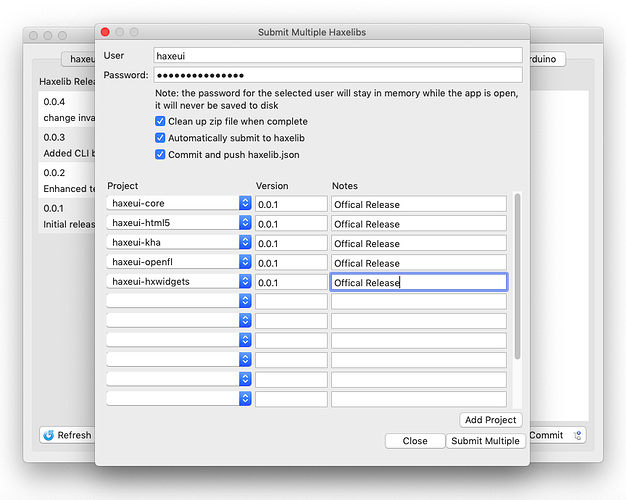 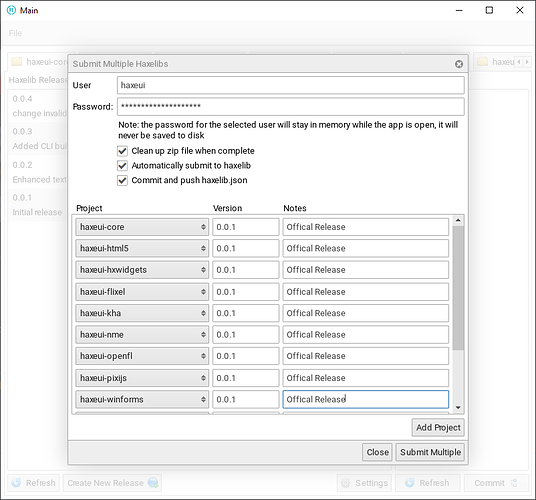 Is this a published app? I don’t see a download link

ah, nevermind. I saw you had it in there. here: https://github.com/haxeui/haxelib-helper

Do you think you can publish some zips in the release section of the repo for people to download from?

To be honest, ive been reworking the app a little into an generic haxelib-manager (with the ability to submit haxelibs ofc)… main reason it needed a rework is because it was a little on the ugly side (especially on osx) and it wasnt threaded, this meant that all operations we blocking - not a huge deal, but a little bit annoying. Especially on startup where it had to load, lets say 20, haxelib infos via http - again, not a huge deal but annoyed me, so now we have a (i think much prettier version) that is all threaded so no blocking of UI thread. Heres a little sneak peek (ill defo create releases once its a little more feature complete!) 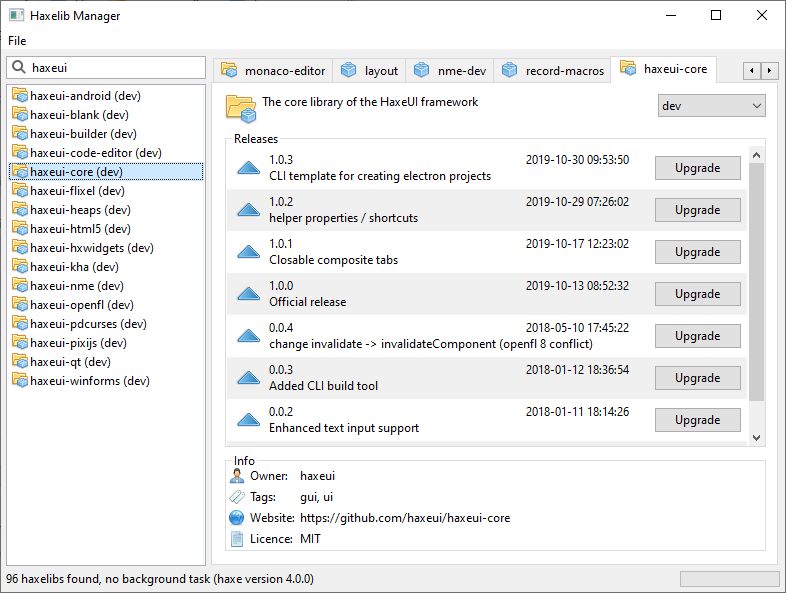 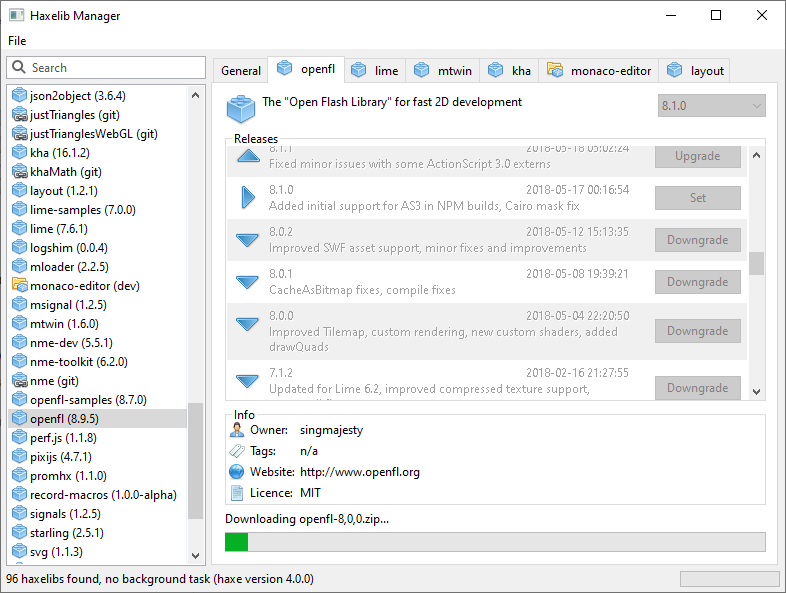 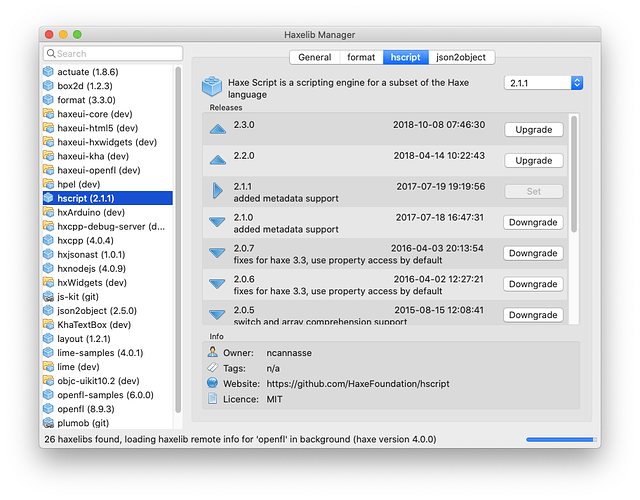 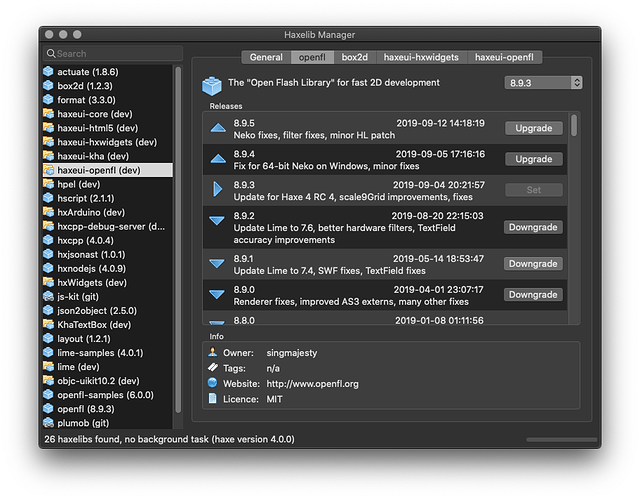 I haven’t made any libraries yet, but I love the idea of this and will definitely use it the second I start publishing libs!!